One of the issues raised at the first meeting of people in the village in January this year, when we were invited to think about how we could help shape the future of Garsington (henceforth known as the Garsington Plan), was whether ‘something could be done about the litter’. Well, something has been done and I hope everyone can see the difference.
The response to our request for volunteers for the Big Litter-Pick was slow at first, but as time went on and the list grew longer, we began to think we might have more volunteers than we had litter to keep them busy. My suggestion that we scatter a few bins of rubbish around the village to make the day worthwhile was politely dismissed. 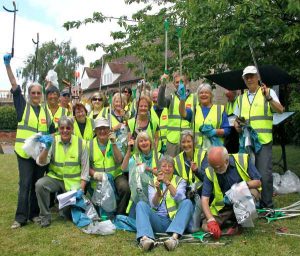 At 2.30 on Sunday 9 June, about 30 volunteers assembled on The Green, where they were issued with litter-picks, hi-Viz vests, gloves and two empty plastic bags each. From there they were despatched to Garsington N, E, SE, SW,W, and all points in between, with instructions to return by 4 o’clock for tea and cakes at the Village Hall. Of course, we were hoping they wouldn’t just hang around the next bend and come back empty handed – I’m sure you’ve heard tales of cross-country runners at school doing just that and strolling back with ne’er a drop of sweat on their cocky faces; my husband certainly has, since he was one of them! However, the bags were satisfyingly full and our troops got stuck in to the promised cakes, superbly baked as always by several people from the village, whose skills never fail to amaze me. 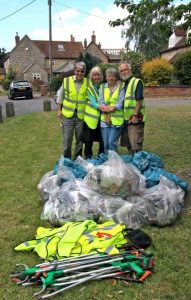 However, the cakes were just the bait, since we had an ulterior motive: to find out whether there were any amongst our volunteers who had enjoyed themselves so much that they would Adopt-a-Spot in Garsington that they would keep as litter-free as possible on a semi-regular basis. I don’t know whether there were any hidden ingredients in the cakes, but we now have a 16-strong group that is already ensuring that the tidy village that emerged on 9 June will remain so in the future.
In February or March next year, we’ll be asking for help again, to tackle the verges at the far ends of the village, where at present several layers of litter are hiding in the long grass. There’s no need to wait till then, though, if you want to experience the joys of litter-picking. Most of the village has been ‘adopted’ now, but there are certain areas that may build up too quickly with litter for our group to keep up with, so it would be great to have extra volunteers on hand for SAS purposes, to deputise in cases of illness or long holidays, or just to give the main group a rest! Do get in touch, if you’d like to get involved – you have nothing to lose but your sanity, as you find yourself obsessing about the anti-social behaviour of litter-droppers/chuckers, but then finding it again when you realise that we can do something about it.
I would like to thank by name everyone who was involved in this project – one that promises to run and run – but I would hate to leave anyone out, so I won’t! Suffice to say, many, many people were needed to make our first Garsington Plan event a success, including litter-pickers, poster-makers, website-posters, cake bakers, Garsington Plan Steering Group, Garsington Parish Council and South Oxfordshire District Council. Thank you all.
Trish Stableford

A shortened version of this report will be printed in the Garsington Newsletter.