This has been a busy time. The Group’s activities have focused largely upon attending meetings and events in the village during the period.

Thanks to the good offices of the School authorities, we were able to set up a stall and engage people in discussion about the future of the village.
The majority of comments showed a distinct emphasis on activities, traffic and transport, and safety. It’s probably fair to say that most people thought that Garsington should offer more to children and young people in the way of activities. An equal number were concerned about traffic speed and footpaths.
We were also able engage with some of the children. They, too, wanted to see a great deal more in the way of activities. One little boy was kind enough to offer a complete redesign of the village, including hotel, airport, parking lot, factory and desert, but I felt his approach, though innovative, was perhaps a little over-ambitious!

The Family Fun Day was excellent! Stephanie Byrne and her colleagues did an absolutely brilliant job. Stephanie counted 154 people attending (66 adults and 88 children), many more than any of us had expected. Fortunately, the refreshments held out… 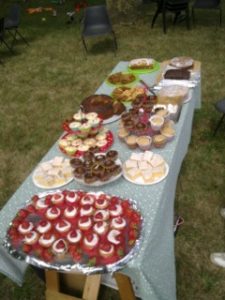 If nothing else, the afternoon told us that one of the things we should test is whether the creation of a regular series of Fun Days in different parts of the village has public support.
We had some great discussions, although some of the people we spoke to did not live in Garsington (it was, after all, a Children’s Centre event). As you might imagine, most of the comments were once again focused on children’s and family activities. However, it was possible to get a much more detailed understanding of what people are looking for. For example, when discussing the possible development of open spaces, people are not just looking for a replica of the existing playground situated in the lower part of the village. They want play or exercise equipment that complements the environment in which it is placed.

Another excellent event! Things began a trifle inauspiciously, however, when we were not, after all, able to get access to the field to set up our tables. One of the residents, Mary Hooper, stepped magnificently in to the breach and offered her garden. In fact, I think that may have turned out for the best, as everyone seemed very relaxed and happy, most staying for quite a long period. 34 people attended. People spoke of setting up a regular series of Coffee Mornings on the Park in the future. 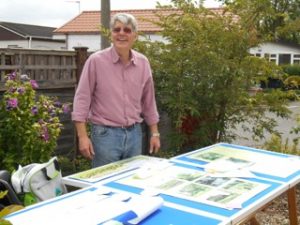 People’s concerns centred on the recent withdrawal of the bus service, the possibility that the Park might be further enlarged (although no current plans are known) and a lack of connection with the rest of the village. There was considerable discussion around the possibility of setting up a volunteer driver scheme (from both potential users and drivers). King’s Copse seems to offer no amenities of its own. There is no meeting place (there used to be an old hut where people could get together, but it was pulled down).

Special thanks are due to Jane Kay and Annie Wright for the time and energy they have devoted to catering arrangements for the August events.

David Baker and Mary Hooper made the Coffee Morning at King’s Copse possible. Mary gave up her garden for the event when the agreed venue suddenly became unavailable!
Last, but by no means least, grateful thanks are due to Alan Bowers who has delivered and collected tables and chairs at Poplar Close and King’s Copse with rare good humour.